Survival in the aviation industry is easier said than done. To survive 40 years and to be prospering as an independent, privately owned company is rare. And as the person currently at the helm of the flying machine that is Martyn Fiddler Aviation, it is amazing to reflect on the passage of time, growth and development that has brought us to where we are today.

How it all began

Our business has gone through several names, but the original is Martyn Fiddler Associates Limited. The business was originally established by Mr. Martyn Fiddler in June 1981 to manage the operations of temporary airfields and heliports at sporting and cultural events. Martyn (an airport and aircraft geek) even had his own radio call sign ‘Seahorse’, to reflect his equestrian background in the British Army and his work organizing air operations at Cowes Week, the UK’s premier yacht racing regatta.

Martyn had been employed by British Airways at London Heathrow and was concerned with their compliance of customs matters in respect of the aircraft, engines and parts. This experience gave him a detailed understanding of customs matters in the UK from the perspective of aircraft owners and operators. He offered this experience to aircraft owners and started arranging the import, export and customs compliance of owners and operators bringing aircraft into the UK. His growing business led him to becoming the customs advisor to GAMTA (now the BBGA). Martyn to this day still sits on the HM Treasury’s Joint Customs Consultative Committee (JCCC). The JCCC is the most senior interface between The Treasury and British industry. Our own Adrian Jones is also a JCCC member.

Eventually Martyn sold the airfield operations business to focus on the import and export of aircraft and parts into and out of the UK, and following the establishment of the EU’s Single Market back in 1992, the EU too. For many years the UK was a popular place of import for larger aircraft into the EU as all aircraft with an MTOW of 8,000 kg or more were ‘zero rated’ by HMRC – something unique to the UK at the time. This anomaly within the EU came to an end in 2011, but the UK and Isle of Man remained a favored place of import into the EU. While the UK left the EU at the end of 2020, Martyn Fiddler Aviation has not and is committed to expanding our European footprint.

In 2003 I was (and still am) a director of Inter-Continental Management Limited (ICM) headquartered in the Isle of Man. I became interested in aircraft customs arrangements when it became likely that an Isle of Man Aircraft Register would be established. As a life long aviation enthusiast (supercharged by my school bordering the Isle of Man’s Ronaldsway Airport) I was determined that our Trust Company business should be at the forefront to embrace the opportunities an Aircraft Registry might bring. The problem was that ICM had no background, knowledge or credibility in the aviation world. As part of my research as to how we might address this problem I met with Martyn at his office at Stansted Airport. We immediately saw synergies between our two businesses. One thing led to another and ICM bought Martyn Fiddler Associates Limited in 2006, 18 months ahead of the establishment of the Isle of Man Aircraft Registry. Martyn and I made sure to be first on the list to meet up with Brian Johnson, the person appointed to establish and lead the Registry.

One of the great characteristics of the aviation industry is its close knit community which is populated by some of the nicest and most convivial professionals you could ever wish to meet. Martyn and I hit it off with Brian from our first meeting. We had no idea at the time what an immediate success Brian would make of the Isle of Man Aircraft Registry, but with the advantages it brought to business aircraft owners, combined with Martyn’s expertise in all things Customs and ICM’s corporate and trust services, business blossomed.

Martyn retired from the Company as the head of its Customs Services division in 2006 and Angie Deady (who would later marry Martyn’s son Mark to become Angie Deady-Fiddler) took the reins. Angie is now as well known (if not more!) within the industry and has been the driving force behind many of Martyn Fiddler Aviation’s new services and developments since her appointment.

On the corporate services side of the business, Martin Kennaugh (pronounced ken-yuck, no really)  joined ICM in 2007 and has been responsible for creating the industry leading benchmark for ICM’s aircraft corporate services ever since. Excellent client service,  corporate governance, administration, accounting and tax compliance  are the hallmark’s of Martin’s stewardship.

In 2013 Heather Gordon was appointed as our first in-house counsel with a background in corporate finance and aircraft, ship and satellite transactions. Armed with her knowledge and experience we have since expanded into all of these specialist markets. Asset purchases, sales, contract management and dispute resolution are now bread and butter activities for our Corporate and Trust service teams.

In 2014 we launched our specialist indemnified tax advisory service with the appointment of Adrian Jones as our Tax Director. Adrian’s knowledge and experience is recognized and appreciated across our industry (he is the only European on the NBAA’s Tax Committee and also sits on Committees at the EBAA as well as the BBGA). The ability to provide tax advice has been a game changer for the business. It has proven so popular Adrian is now supported by two other qualified Chartered Tax advisors with vacancies for more (please do get in touch).

In 2015 Martyn Fiddler Netherlands was established and customs licenses obtained which has been an overwhelming success.

We rebranded all of our aviation offerings under the name Martyn Fiddler Aviation in 2016 – a landmark moment for joining all of our teams and completely redesigning our website. The ICM name endures at Group level (ICM Group) and as ICM Wealth, the name for our general trust and corporate business which services the needs of our non-aviation clients from our offices in the UK, Isle of Man and now Ireland.

In 2018 we acquired our first Authorised Economic Operator (AEO) status in the Isle of Man. This has been followed by the granting of the same status in the UK and will shortly be applied for in Ireland. AEO has allowed us to move into the provision of customs services to MROs and the aviation spares industries. This side of our business is now rapidly expanding.

2019 saw the opening of our office at Shannon Airport in Ireland and in 2021 Angie was appointed as a Director of the Irish Business and General Aviation Association (IBGAA). 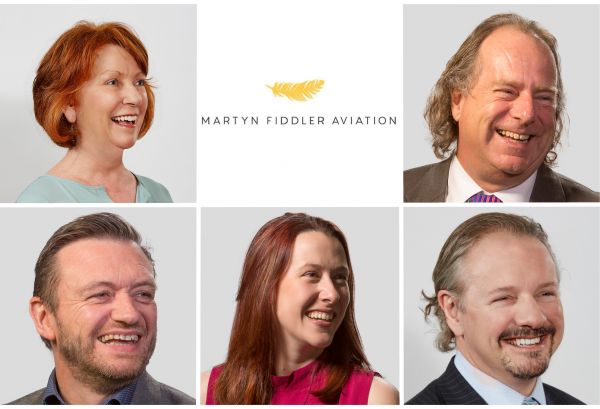 Most recently, we acquired our CHIEF license in 2021 which allows us to record customs entries in the UK in HMRC computerized system directly. We have further plans to grow and launch new services in 2021 and beyond, and actively seek input from our industry colleagues to see what services could benefit their businesses and where we can create value.

For a specialist airfield operations company to become a leading specialist in tax, customs and trust matters seems a little unlikely. But aviation is characterized by continuous innovation, development and expansion and we are determined to keep on keeping on.

We can’t wait for the borders to reopen and meet with our clients, family and friends. We are also looking forward to welcoming people to our 10th annual Isle of Man Aviation Conference which we have had to postpone for two years to June 2022. Travel broadens the mind, but can throw up problems from time to time. We are dedicated to solving as many of them as we can so we can all keep flying.

A heartfelt thank you

I must say thank you to all those that have inspired our business, helped us grow and created innovation in our business. In particular I would like to thank Martyn Fiddler, Brian Johnson, our clients and the dedicated teams of amazing people I get to work with everyday; without you the last 40 years would not have been possible. Cheers to the next 40!

Mark Byrne is a director and shareholder of Martyn Fiddler Aviation. Mark studied law at the University of Westminster and received his MBA from Manchester ...